For Spring Break this year, I'm staying with my dad and stepmom in Arizona for the week. In the past I've had this habit of never writing sufficiently about the trips I go on. Either I can't commit myself to sit down and do it, or nothing I put down sounds right or really conveys the experiences I've had. But this is a new blog, so I'm going to do better this time, starting with my first trip of the year.

I got home Friday and spent some time with Ma and Madison. Then today I got up and had Ma braid my hair...

Had some last-minute cuddle time with Madison... 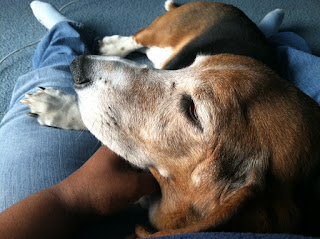 And was off to DTW. My first flight was completely full, but I had an aisle seat, so that was convenient. We took off late, but managed to get to Minneapolis-St. Paul about 30 minutes ahead of schedule.

I sat in MSP Int'l for 3 hours before my next flight and let me just tell you, MSP is not an airport. It's a mall. It's like Somerset, but with boarding gates. Unnecessary but convenient, I guess. But I digress. Luckily this flight wasn't completely full, and I got an entire row to myself. Again took off late, but managed to get here about 30 minutes early.

My dad greeted me at baggage claim, and a curious thing happened. He said, "Everybody's been waiting for you to get here." Everybody? Last time I checked, it's only you, Cynthia, and the dogs in the house. So unless there's some surprise late-night welcome party, what do you mean by Everybody, Dad? Then he follows with "Did Cynthia tell you that we have a kid living with us now?" Turns out, Dad and Cynthia have a 13 year-old white boy named J living with them now. He's their foster child.

Now I already knew that this was something that Cynthia wanted and Dad didn't (he went along with it anyway). I knew that they had gone through all the necessary processes and were approved to have a child placed with them. However, I did not know that they had gotten a foster child already. Why didn't they tell me? I know that I probably don't call often enough to give me the right to know everything about their lives, but they've known since October or November that I was coming. Yet they conveniently forgot to tell me about this new addition. That's a little inconsiderate isn't it? Maybe they thought if they told me, I wouldn't have come. That might have been true. But still, a little heads-up would have been appreciated.

It's ironic, really. I'm actually family, but I'm the guest. He's the temporary resident, but he knows the house better than I do. Eh well. He seems like a pretty good kid. I don't know his story yet and I'm not sure that I will before I leave. And I know it sounds selfish, but this is my spring break, so I really hope he stays out of my way. Luckily he'll be at school all week so that probably won't be a problem. However, I do hope for his sake that Dad isn't too mean to him. It's clear that he only puts up with J because of Cynthia, and I really don't want it to become a Cinderella situation where he treats J like crap while I'm the evil stepsister who gets treated like a princess. He's just a kid and even though his presence isn't ideal, he doesn't deserve that.