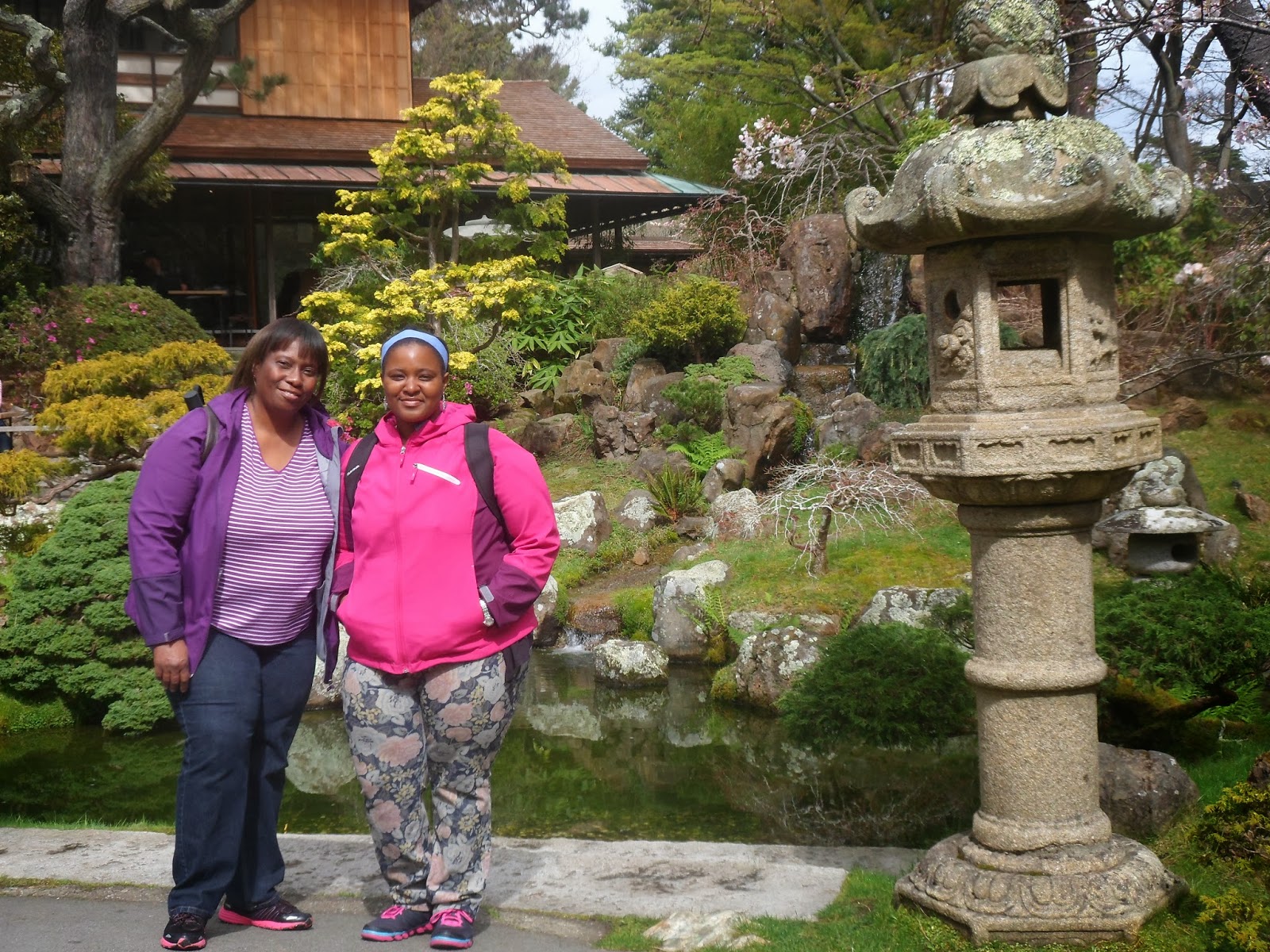 Our first stop today was the Japanese Tea Garden which is in Golden Gate Park. It's not a huge garden but it tries to give you a little bit of everything: a zen garden here, a couple koi ponds there, stone lanterns, a bronze statue of Buddha, a couple Shinto pagodas, sakura trees, a moon bridge. Listing all these things off might make it sound clustered, but it's actually designed, organized, and maintained exceptionally well. So well that I just kept saying to Ma, "Ah, now I want to go back to Japan." It's beautiful and it smells like the color green! Once we'd gone through the whole garden I was so relaxed and in such a nostalgic mood that I almost didn't feel like doing anything else. I was ready to take a nap, haha!  But we were on a roll, so we walked through more of Golden Gate Park then took a bus to Haight-Ashbury. 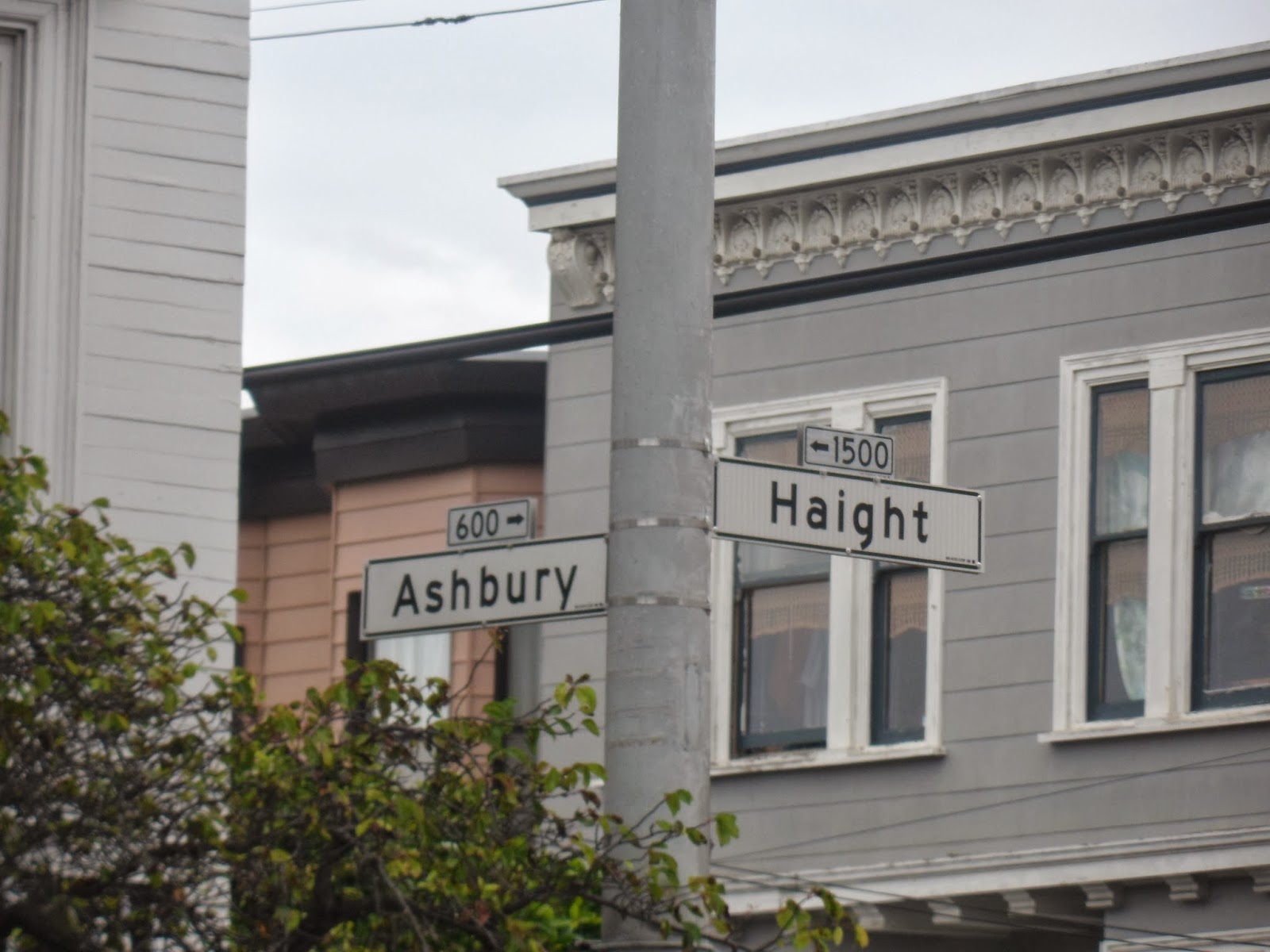 Ma and I aren't very knowledgeable or interested in hippie history or subculture, but we knew that Haight-Ashbury is a very important neighborhood with a lot of personality, so we wanted to at least visit and see what it's like. We walked around a little bit, popped into a couple vintage stores, took pictures of some buildings. But there wasn't much for us there. We spent a few minutes deliberating on what to do next. Looking for "Painted Ladies" was next on the list, but neither one of us could agree whose idea this originally was. And neither of us was all that excited about going just to look at houses, so we decided to skip that one. 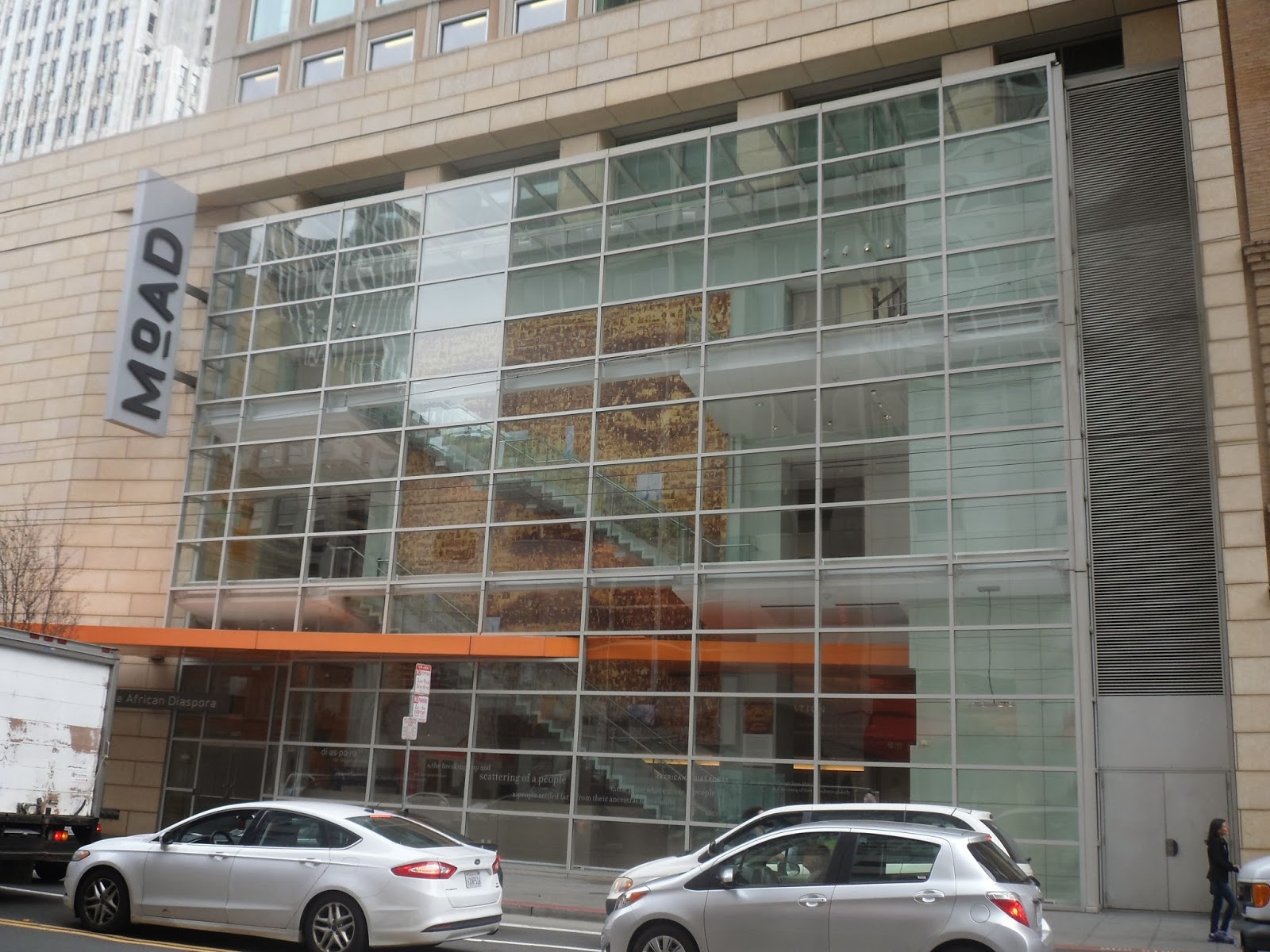 There were still plenty of hours left in the day, so instead of waiting until tomorrow like we'd planned,Museum of the African Diaspora (MoAD). It's a small museum whose public space emcompases only three floors. But its goal is unique and well-executed given its size: helping people see and understand how different cultures and populations of African descent around the world are connected and speak to each other. Their current exhibit is "Crosscurrents: Africa and Black Diasporas in Dialogue, 1960-1980". It aims to demonstrate dialogue and solidarity between people of African descent through art, literature, and activism ("Culture as a means for holistic empowerment... African people to define culture on their own terms").  It runs from now through April 13th. 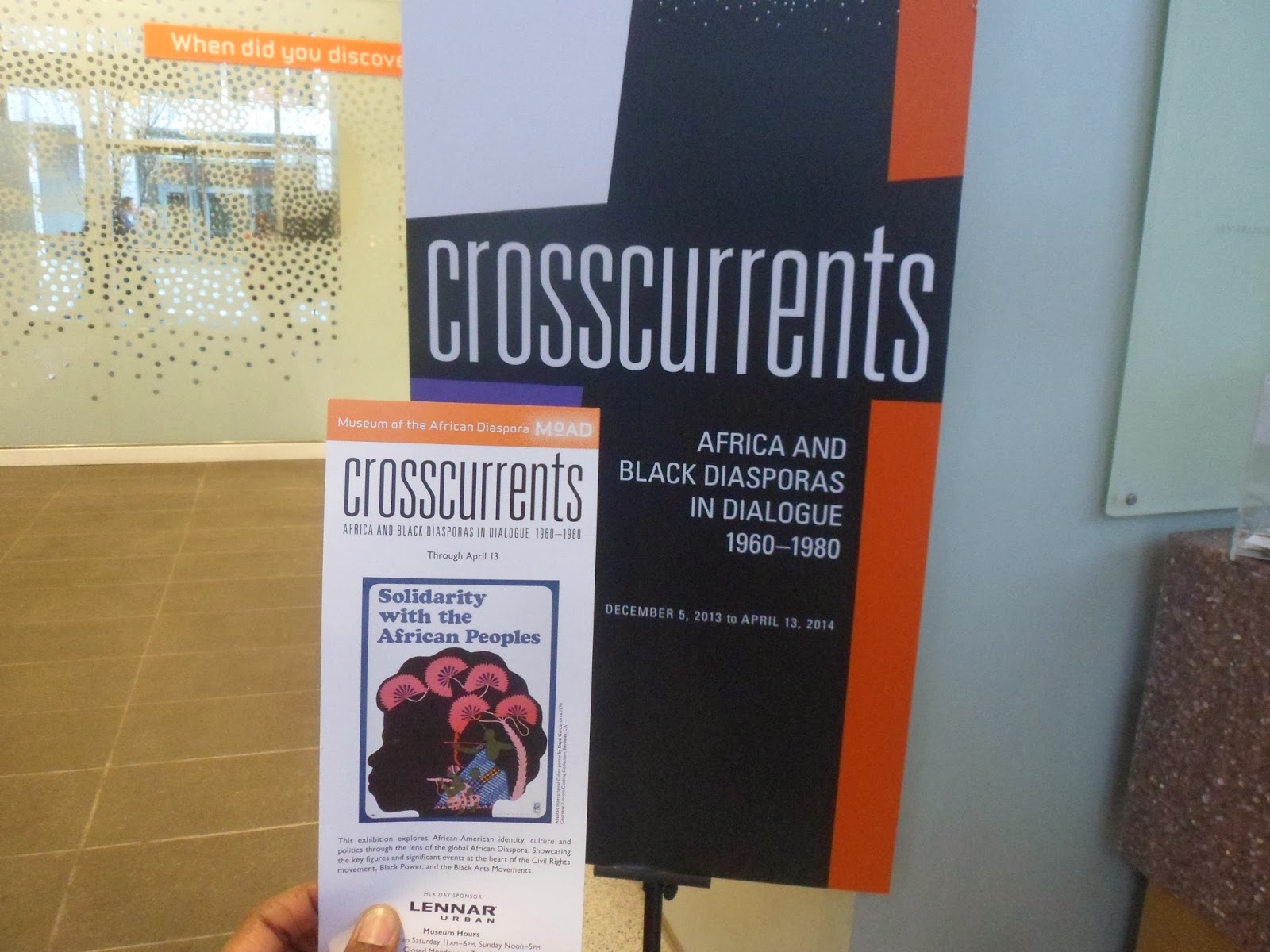 The second floor holds most of the exhibit. In one room are posters, photos and other materials from the Blank Panther/SNCC/OSPAAAL movements. There's also a projector in this room showing a documentary called The First World Festival of Negro Arts in which groups of African descent from several different countries are shown celebrating diversity and solidarity through performances. Another room is darkened with benches along the walls; you sit while listening to the accounts of people who survived slavery and the Trans-Atlantic slave trade. There's also a small theater, where you can choose from a selection of short or full-length films about various topics or people connected to the African diaspora. Despite Ma's protests, I chose an episode of a children's educational cartoon from Nigeria called Bino and Fino. The title characters are young siblings, and in this particular episode ("Big Birthday Party") their grandparents explain independence and colonial rule to them on Nigeria's 50th Independence Day. I liked the way they handled the subject in a sensitive manner, referring to colonial forces as "bullies" and "uninvited guests" (as opposed to thieves, white supremacists, rapists, murders, you know). The last two rooms on this floor feature numerous examples of cultural diversity and commonalities that exist amongst blacks around the world.

The third floor is an art gallery showing paintings, sketches, posters, and sculptures made my artists of African descent. Some of the works are explicitly about members of the diaspora or issues related to them, others are not. My personal favorites were Nap Tapestry by David Hammons and Trophies of Empire by Donald Locke. Overall, the museum is small and the exhibit is kind of short, but no less interesting. We were glad that we went. 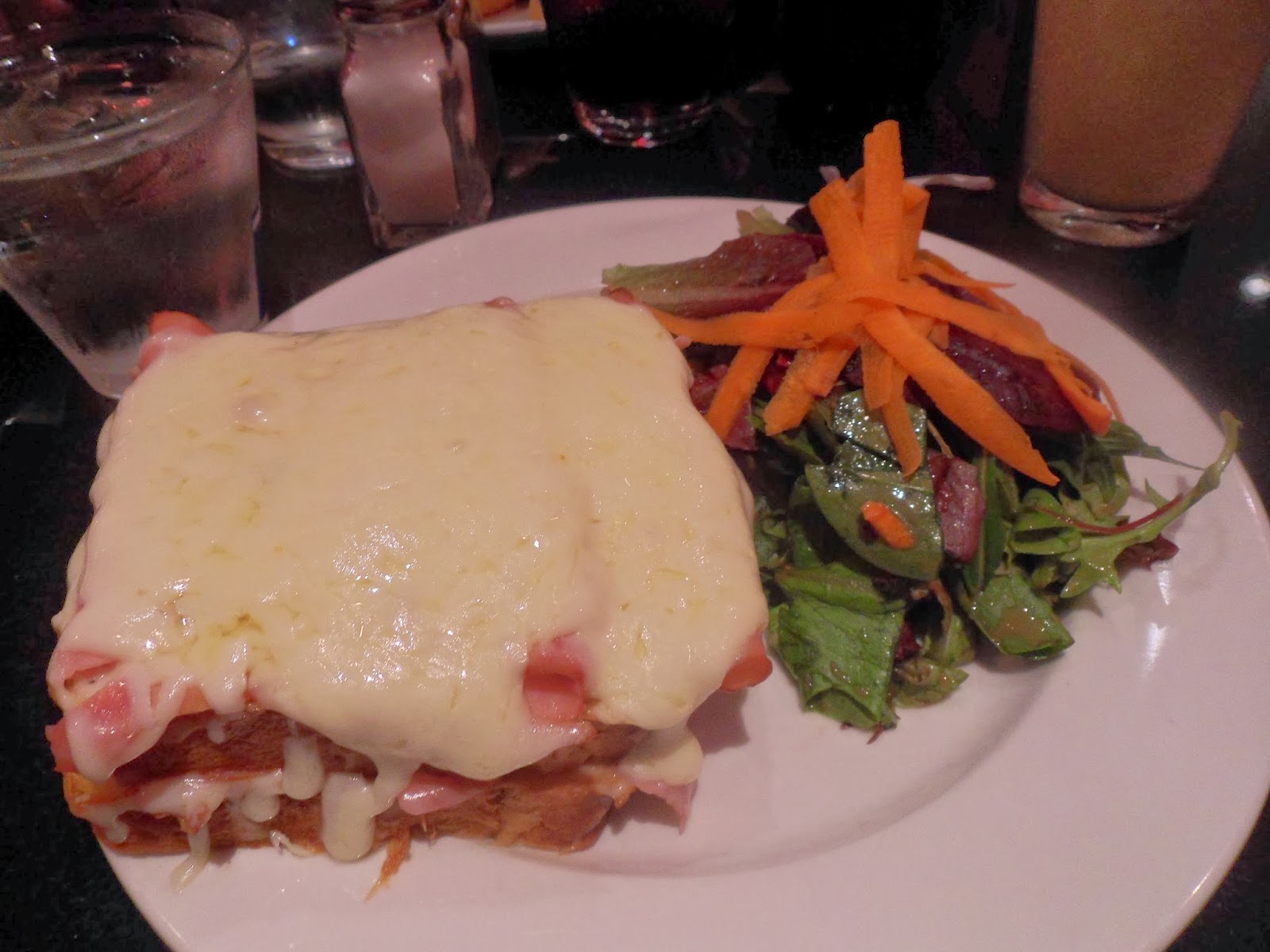 From there, we returned to Bellini to try their non-dessert items. I had croque monsieur (another first!), and I have nothing to compare it to but I enjoyed it very much.

Another day well spent. Tomorrow's our last full day here, and I can't believe how quickly this week has gone.