Looking for a Watch in Otsu

My watch stopped working on Wednesday, so I've been meaning to get a new one. At first I planned to look for one at a recycle shop (secondhand store) in the next town over. But I found out that my friend Ivy was going to Otsu today, and I figured why not look for one there? So after class Ivy, our friend Bryen, and I set out for Otsu, the capital of Shiga Prefecture. 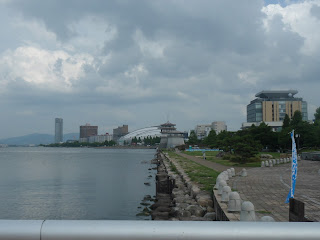 ("Ivy" and "Bryen" were both with me last week at kaiten-zushi and karaoke. I didn't mention their names then, but they found out that I have a blog and asked me to give them a shoutout using "cool" aliases. With that said, what's up y'all! Thanks for the support!)

We were only in Otsu for about 5 hours and only went down two streets, so I can't make a well-informed conclusion about the city. However, I can say that Otsu is so beautiful! I feel like I've said that about nearly every place I've visited here, but it's true. Otsu is not just beautiful, it's a pleasant place. I got a really pleasant feeling just by walking around there. While walking along the shore of Lake Biwa we came 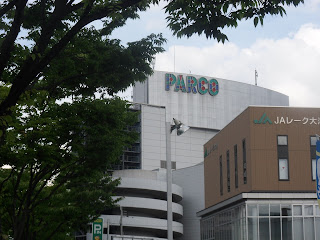 across this guy playing the guitar and singing an Oasis song to his girlfriend. Ivy told him that we lived in Hikone, and he said he thought Hikone was more beautiful than Otsu, but I must disagree.

After some strolling we made our way to Parco, a large mall franchise that has locations throughout Japan. Other than finding a watch for me, our plan was to just see what the place had to offer and maybe buy a few things. There are 8 floors in Otsu Parco but somehow we only made it to 6 of them and couldn't find the way to the last 2. In it there was a really nice watch store called Tic Toc and some other stores that sold watches, but they were all upwards of  ¥8,000 ($79). So I opted for a  ¥2,000 ($20) one from G Plaza, which was a really cute accessories store with reasonable prices. 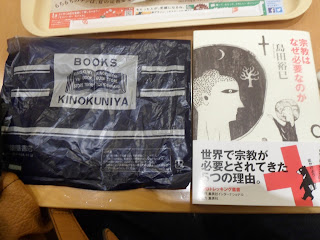 The only other thing I bought was.... a book! I know, no surprise at all. The book is titled 宗教はなぜ必要なのか (Why is Religion Necessary?) by Hiromi Shimada. It was the only book I saw in the store whose title I could read and understand completely, so I bought it. I'm going to try to read and understand all of it within the next 5 years. 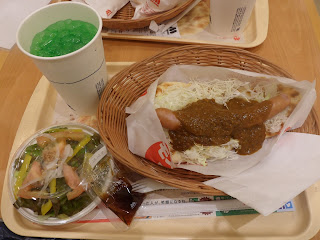 Before leaving we stopped at the food court and got some food from MOS Burger, which is the second largest fast-food chain in Japan after McDonald's. I got a curry dog on naan bread, a salad and melon soda. The curry dog was a litte strange-looking and messy, but it tasted great!

After some more walking and looking and joking and talking, we made our way back to Hikone. In the end we didn't do much in Otsu, but at least I got to go to another place that I hadn't been before. I had a nice, short break from Hikone, and I finally have a watch again! 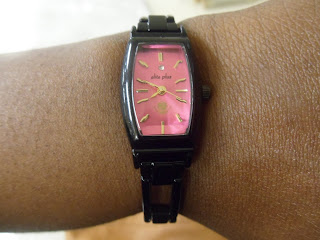