I didn't plan on leaving Osaka until 8pm, and when we left Osaka Castle we still had 4 hours to spare, so we took a train to Osaka Station. I still hadn't eaten takoyaki yet and I had to leave from there to return to Hikone anyway, so we decided to hang around there for a while. 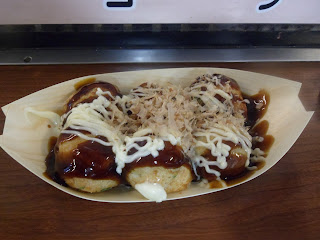 We got decently priced takoyaki from a stand-and-eat place called Hana Dako. Takoyaki are fried dough balls stuffed with tako (octopus). They're another staple of Osaka and my favorite Japanese food. I generally don't enjoy eating meat, but I will gladly tear up some tako in a minute. Lord Jesus thank you for making a way for me to come to Japan so that I could realize that I love tako! Ma can look at me crazy and shake her head all she wants, but none of that will change the fact that tako is delicious! We split 6 balls and after I took a quick picture all of it was gone within two minutes. 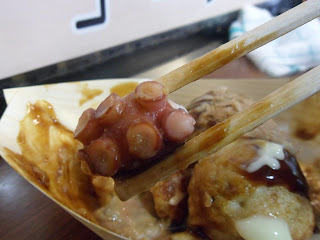 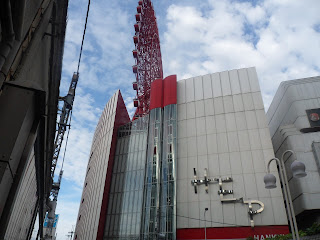 We passed through Osaka Station and Hankyu Grand Building to get to HEP Five, a huge mall and entertainment complex that's extremely popular among young people. Today was the last day of HEP's huge 5-day bargain sale and... I don't think I've ever seen so many Japanese girls in one place. People everywhere. Employees screaming at shoppers trying to them into their store. Security standing guard at every floor. The loudest yet most orderly pandemonium you could imagine. We went all the way to the top, looked around a bit, then came back down. 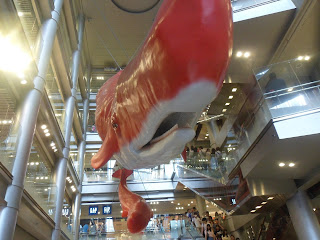 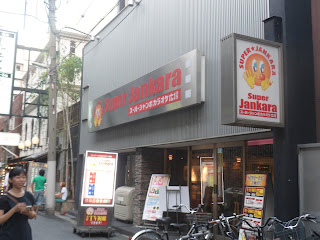 There were still 2 hours to kill, so I figured why not do some karaoke! Fumiko found a spot called Super Jankara, and they gave us a big ol' room with green leather seats. I sang mostly Japanese songs this time and though it didn't all sound too pretty, I was proud of myself for trying.We sang there for an hour and a half, then walked back to Osaka Station and parted ways there. 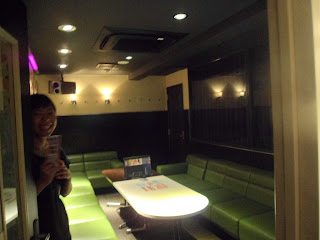 On the way back to Hikone:

I had to change trains in Yasu, but I got confused and missed the next train that I was supposed to catch. I just waited for another train and everything was fine. Set myself back 15 minutes but I still made it to my room before 10 o'clock, so it was no big deal. Something amazing happened, though. While going toward the restroom in Yasu station, a Japanese gentleman thought I was lost and asked in English, "Can I help you?" I appreciated his kindness but that really startled me. A Japanese person that I didn't know talked to me? In public? After dark? Wow.

My trip to Osaka exceeded my expectations. I had a fantastic time, and it was all thanks to my friend Fumiko! I actually met her at my school back in the States, and then after I came here she suggested we meet up in Osaka. Fumiko is from Osaka, but she currently lives in Kyoto, so she traveled all the way from there just to hang out with me and show me a good time. She also took it upon her self to pay for a lot of things. Fortune-telling strips at Shitennō-ji, the taxi to Dōtonbori, most of the okonomiyaki, the green tea ice cream in Osaka Castle Park, she paid for all of it. On top of that, even though she had to go to a different station to return to Kyoto, she walked me back to Osaka Station and helped me figure out how to get back to Hikone. She's an awesome person and I am so grateful to have her as a friend. Hopefully I'll get to see her again before I leave Japan. Thanks for everything, Fumiko! 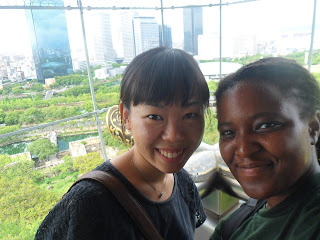