Oh. my. goodness. What a night last night was! Yesterday was July 14, "le 14 Juillet", "la Fête nationale"! This date commemorates the beginning of the French revolution back in 1789, and is commonly known to anglophones as Bastille Day. It's kinda like France's Independence Day. 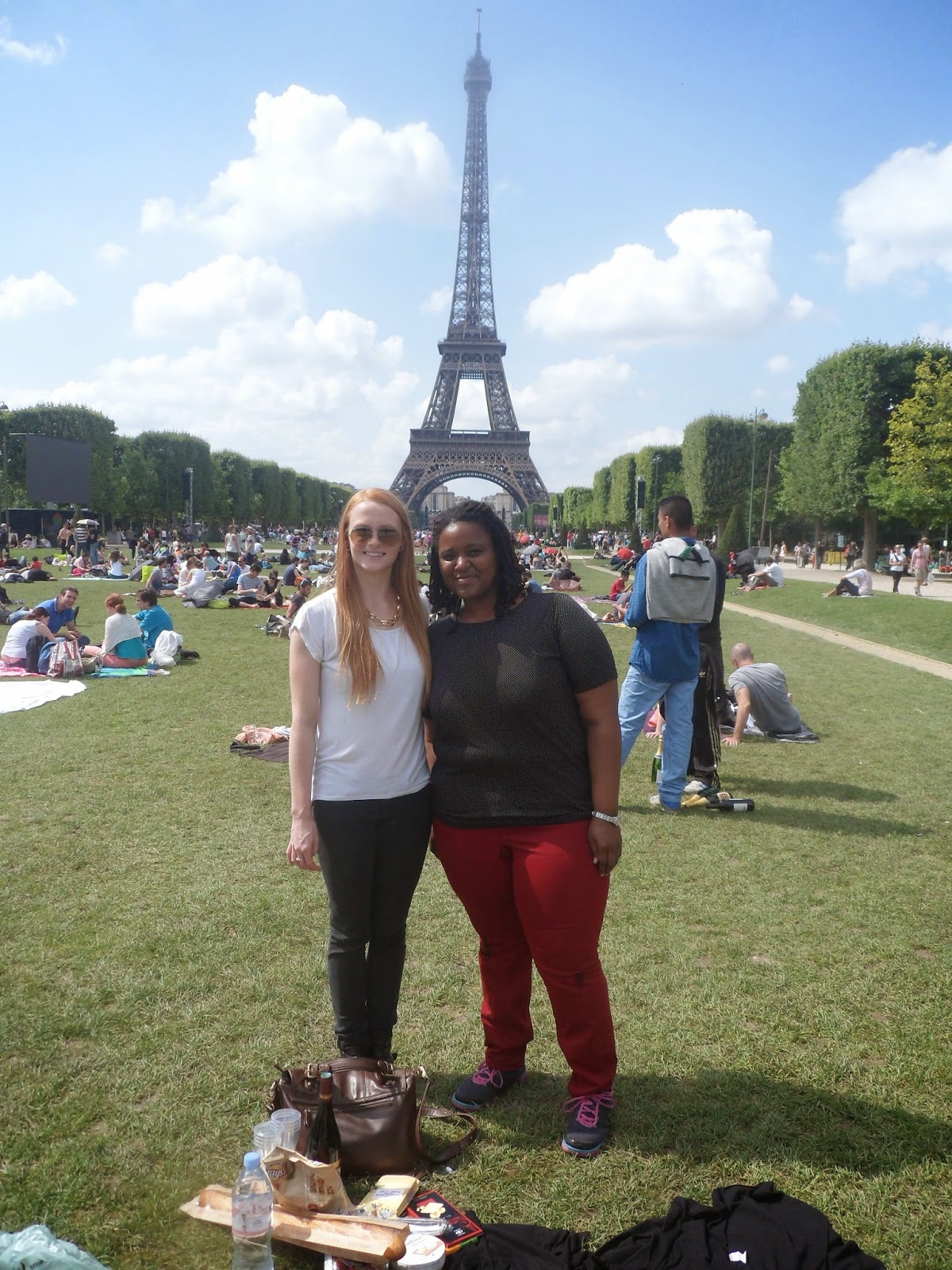 In the afternoon I met up with H to find ourselves a spot on le Champ-de-Mars. This is the enormous park/garden/ lawn that lies right in front of the Eiffel Tower. There was to be a classical music and opera concert ("le Concert de Paris") by l'Orchestre national de France at 21h30, followed by the annual fireworks show at 23h. We got there before 16h, nearly six hours in advance. H wanted to have a picnic, so we stopped at a nearby Carrefour to get a baguette, cheese, chocolate, strawberries, and wine (for H) before staking ourselves out a spot. And once we got our spot, we did not move! This might seem like overkill, getting there so early and refusing to leave our spot. But you don't understand how quickly the place filled up! Crowded doesn't even begin to describe how people were crammed on that lawn. Even as early as an hour and a half before the concert started, there were no more spaces left. I only went to relieve myself once, and I nearly had to fight my way there and back. (Ok, not really "fight". But it was a struggle! People don't want to move even when you ask politely, but then they get mad at you when you trip and step on them or their things. What sense does that make? You can't have it both ways, folks!) Anyway...

As I said, the concert wasn't supposed to start until 21h30, but the orchestra started rehearsal around 17h, so we basically got to sit in on an extra concert. Here's a clip of them playing the Star Wars theme song: 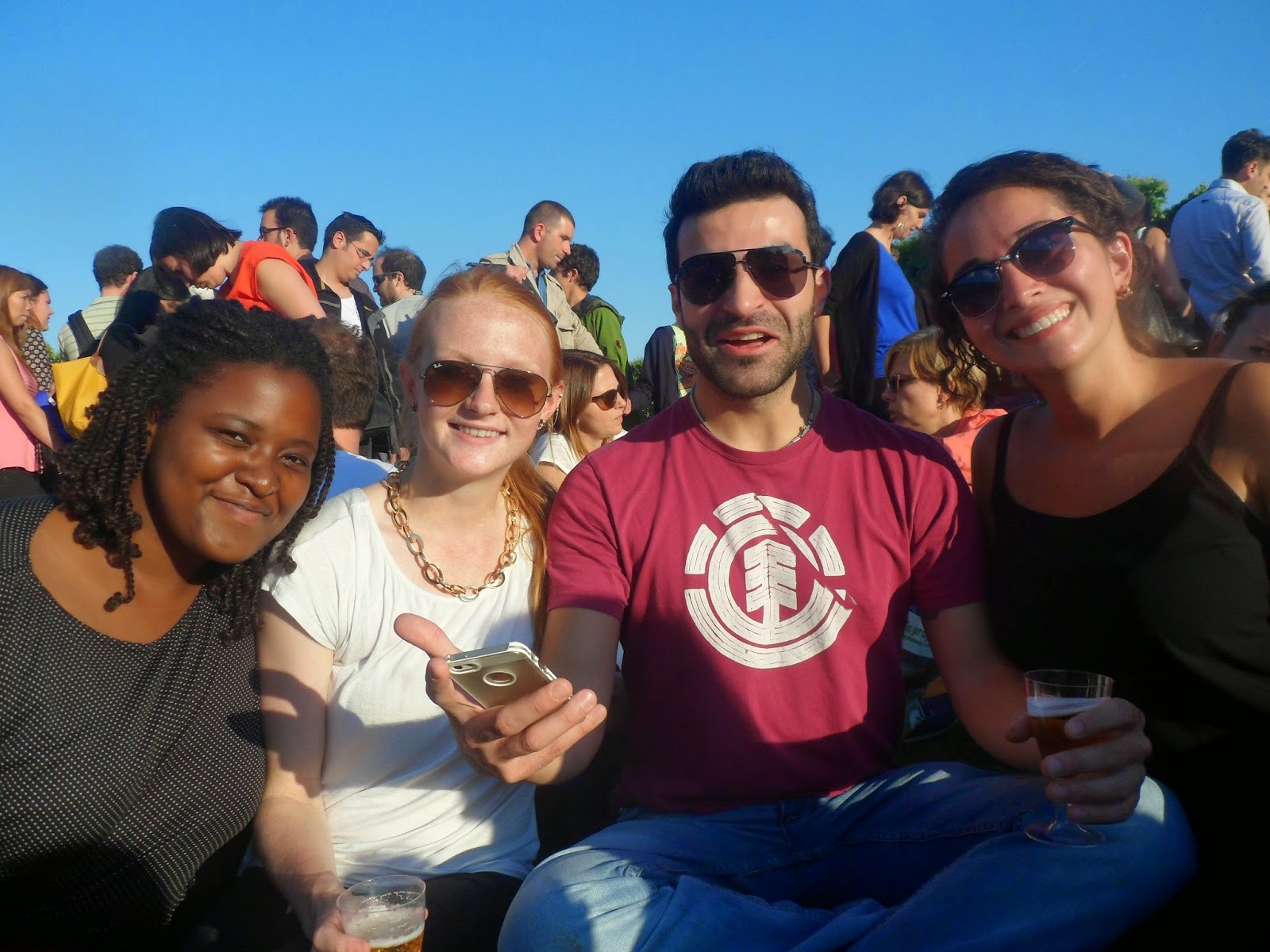 H and I spent hours sitting out in the sun and snacking as more and more people started encroaching. She'd invited two of her friends to join us, and fortunately we were able to hold onto their places until they arrived. One of said friends is an Italian guy our age named Navi, and he was hilarious! One of the first things he said to me after introductions was, "Welcome to Europe! And if you don't like it, it's because you're in France." I was dying! 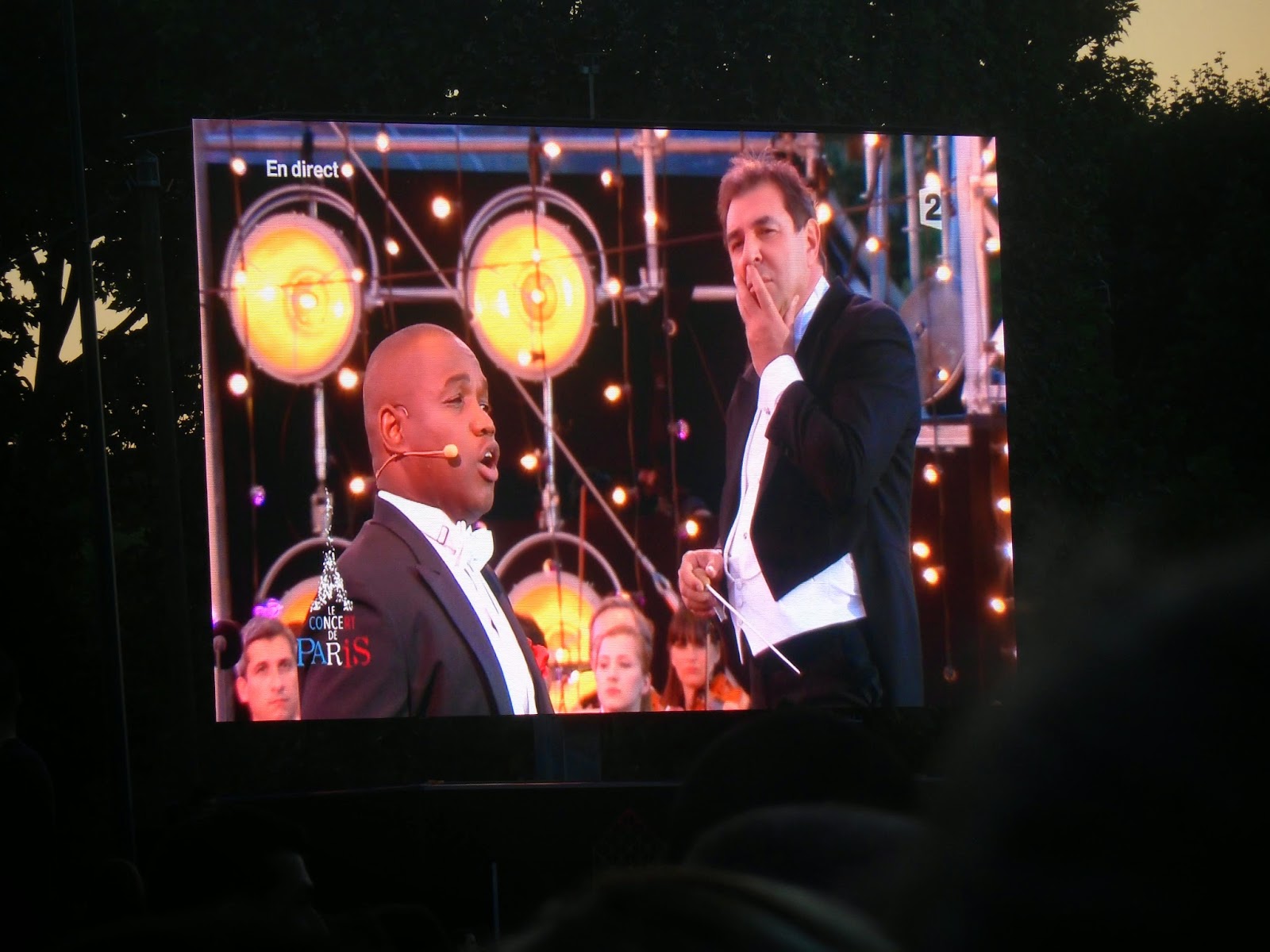 We passed the remaining time chatting and playing cards before the concert finally started. I was so pleased to see a brotha named Lawrence Brownlee open the show. He sang with so much presence that even the director was watching him like, "Daaang." And to think he was filling in for someone else! Black folks be reppin'! My other favorite was an absolutely stunning rendition of "Duo des fleurs" from  Léo Delibes's Lakmé, performed by Anna Netrebko and Elina Garanca. It's one of the few opera songs that I'm familiar with, and hearing it sung so beautifully just made me so happy on the inside. It was one of the most moving things I've ever heard, and I teared a little bit. 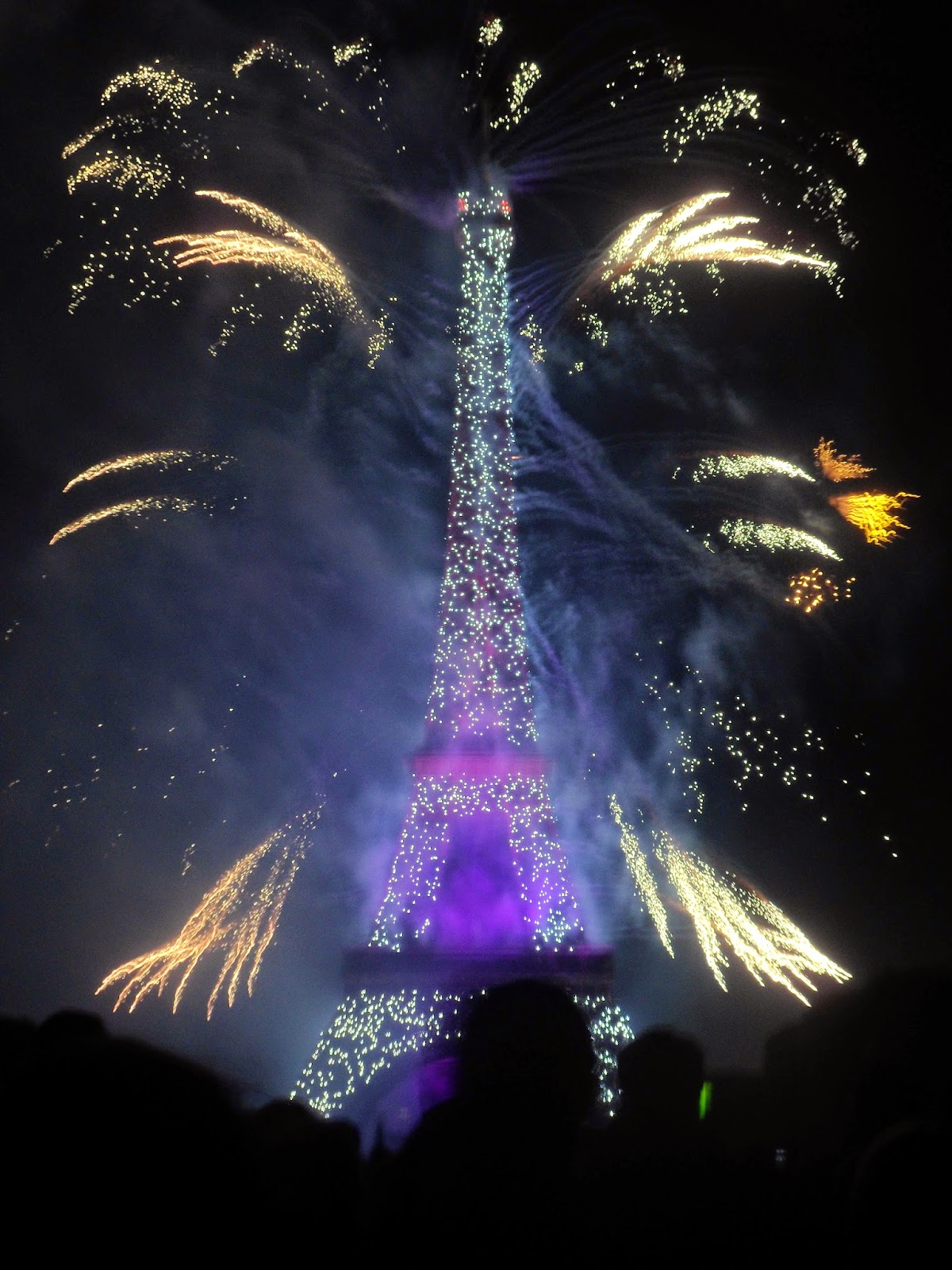 The concert ended and the fireworks started promptly at 23h. But really I should say this was just a continuation of the concert, because the orchestra provided music throughout the fireworks show, while the Eiffel Tower changed into a variety of colors. The whole thing was outstanding! I definitely cried a time or two. I tried to fight it, but I couldn't. The display was splendid, the music was enthralling, and it was overwhelming to think about how I was having this experience and sharing such a joyful moment with thousands of other awestruck people. Before the show even started, La Marseillaise (France's national anthem) really got me pumped. Everybody was standing and shouting singing along, you can't help but be swept along in that collective feeling.  I even started to feel proud, and this isn't even my country! 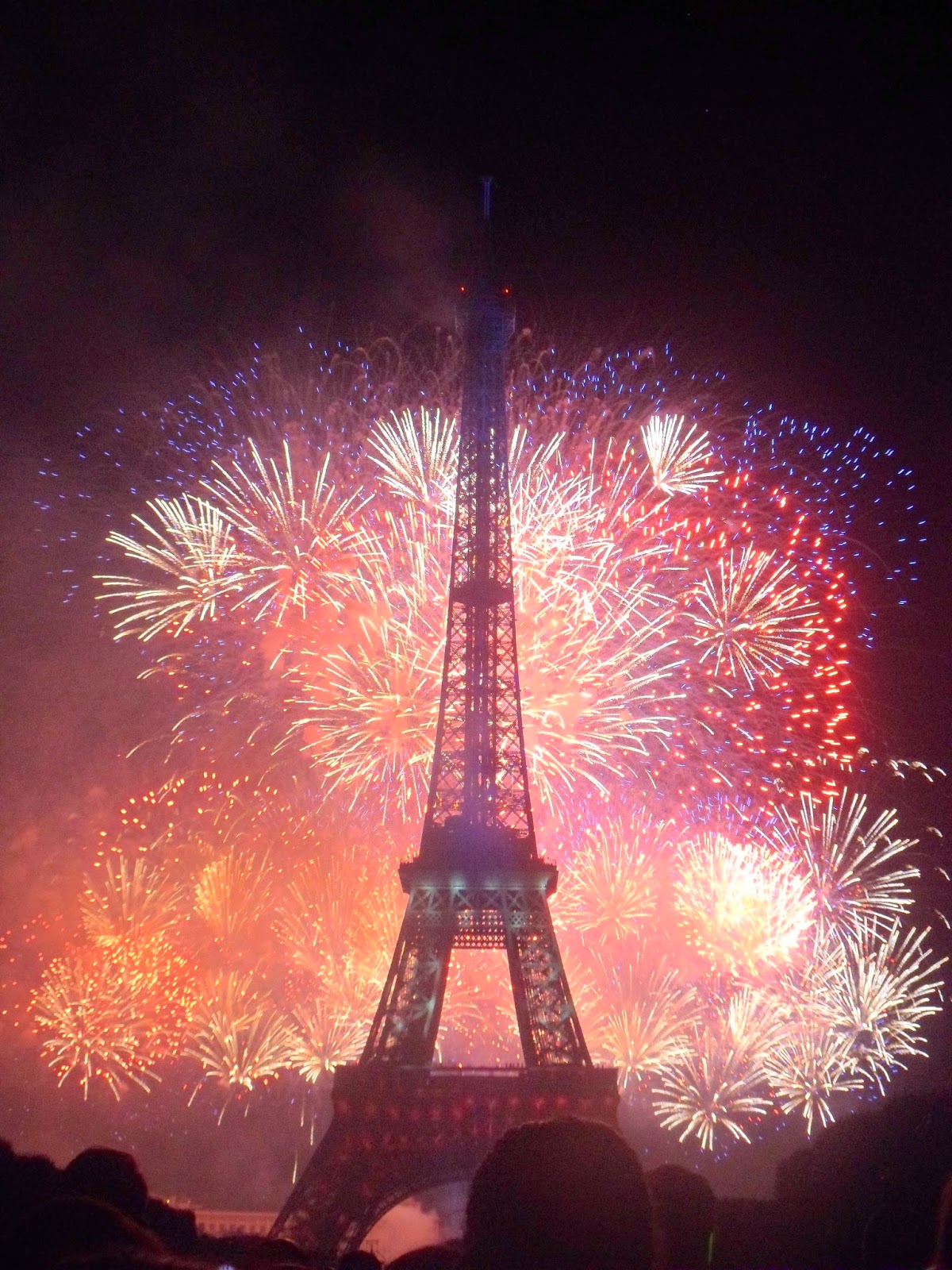 It wasn't until after the fireworks ended, the lights came on, and everybody started rushing home that I realized just how many people were there. Funny thing is I'd chosen not to go the military parade that morning because just the idea of being in a crowd of over 10,000 people stressed me out. But at Champ-de-Mars I ended up being surrounded by even more people than that, and it actually didn't bother me at all. The only thing that bothered me was that I couldn't get back the way I'd planned. The metro was out of the question because that's where most people were heading, and the bus I'd planned to take wasn't stopping in that area because of the crowds. So I walked. Yep, I walked from Champ-de-Mars all the way to my neighborhood near Place de Clichy. Surprisingly I wasn't scared at all to be walking alone in the dark like that. I guess I was too exhausted, dehydrated, and focused on getting "home" to be scared. With the exception of getting lost for a few minutes and passing by a fight later on, nothing unpleasant happened. I was able to make it to my room at around 1h40. I'd been walking through Paris for nearly two hours.

I took as many photos as I could, but if you'd like to see the fireworks show in its entirety, the Paris city government has posted a video of it here.

Last night was probably one of the best nights of my life! Even with the crowds and the madness, I feel blessed to have been here in Paris for la Fête natonale. I'll never forget it.