Saturday was a busybusy day! 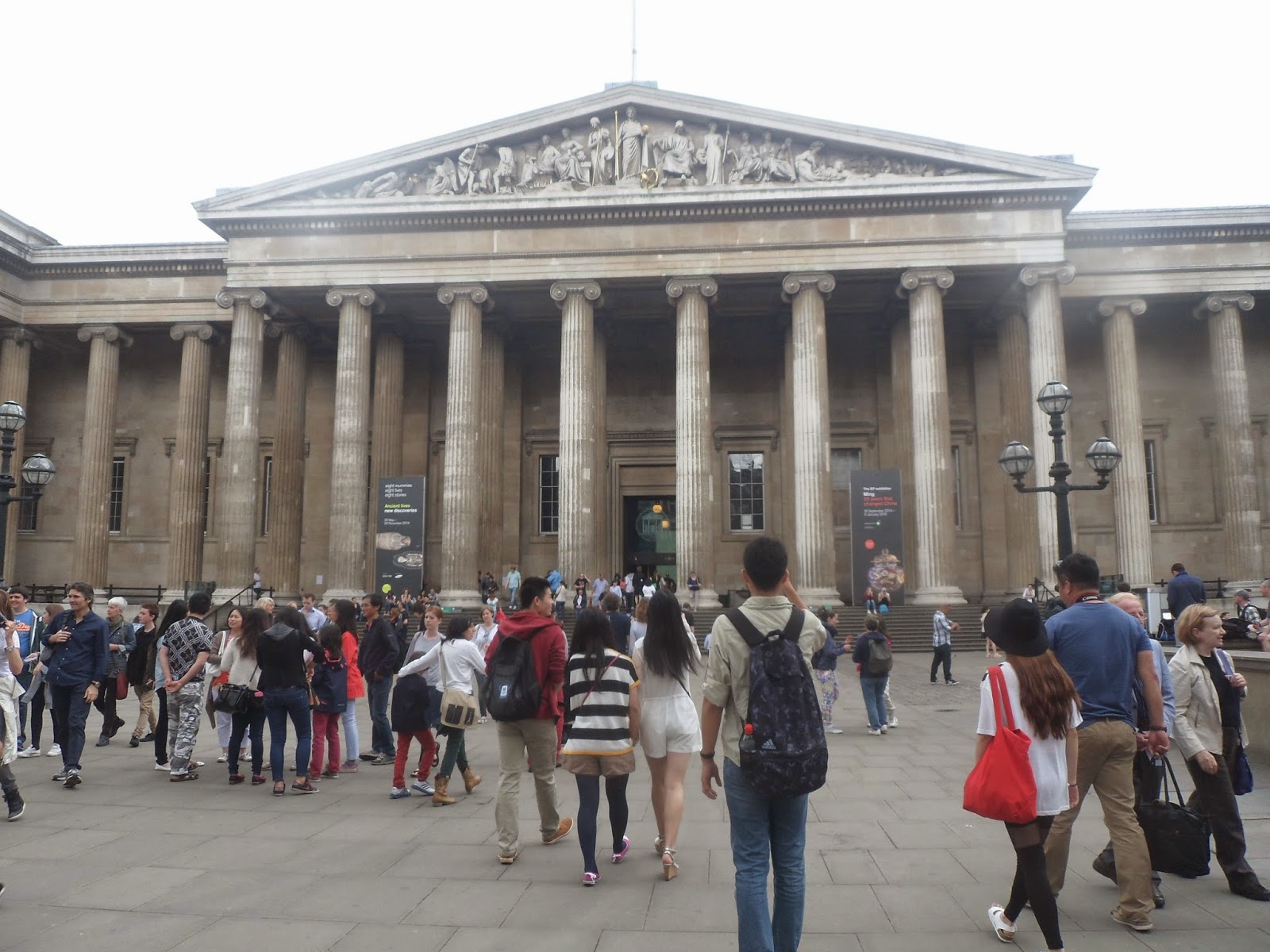 First thing in the morning we got a bite to eat at a nearby bakery, stopped at an ATM to get myself some pounds, and then got myself a day pass for the tube and buses. Then our first stop of the day was The British Museum!

The British Museum is one of the most comprehensive human history and culture museum's in the world. It's also free to enter! Anna and I visited the following permanent collections: Ancient Egypt, Africa, China/South Asia/Southeast Asia, and Korea. Would've visited Japan too, but we had to get a move on. 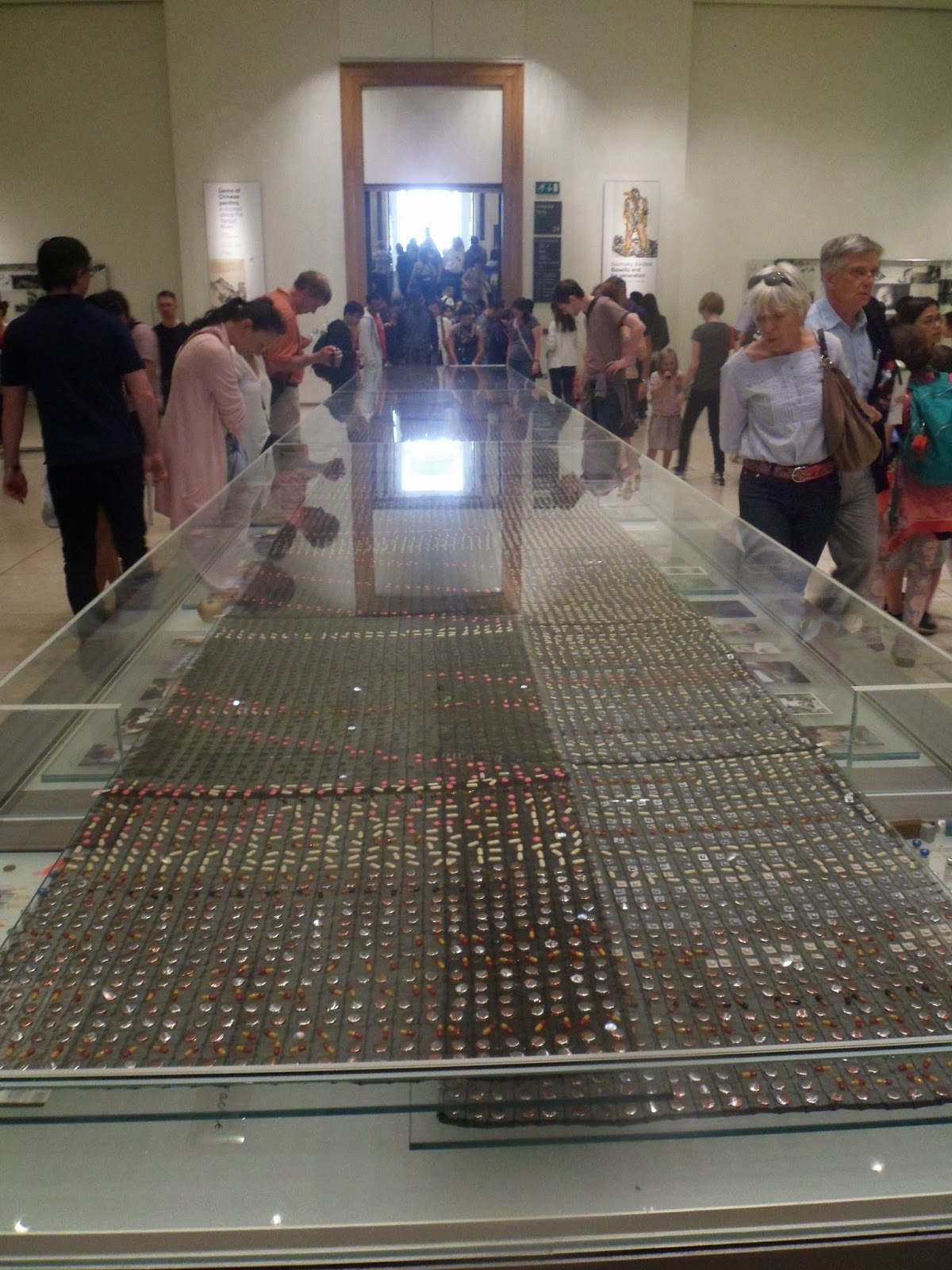 The display that left the biggest impression on me was Cradle to Grave by Pharmacopoeia. The lives of one man and one woman are laid out through the pills and other medications they took throughout their lifetimes. The meds are laid out on an extremely long table and are marked by age. The purpose of the display is to make people think about the British approach to health care and also about how great a part medication has in their lives. (The way I saw it, it also prompts visitors to consider the extent of their own reliance on pills/meds, and question whether their dependance on it is really for the better.) It was simple, yet thorough and so eye-opening! I wish people had access to a display like this in the States. 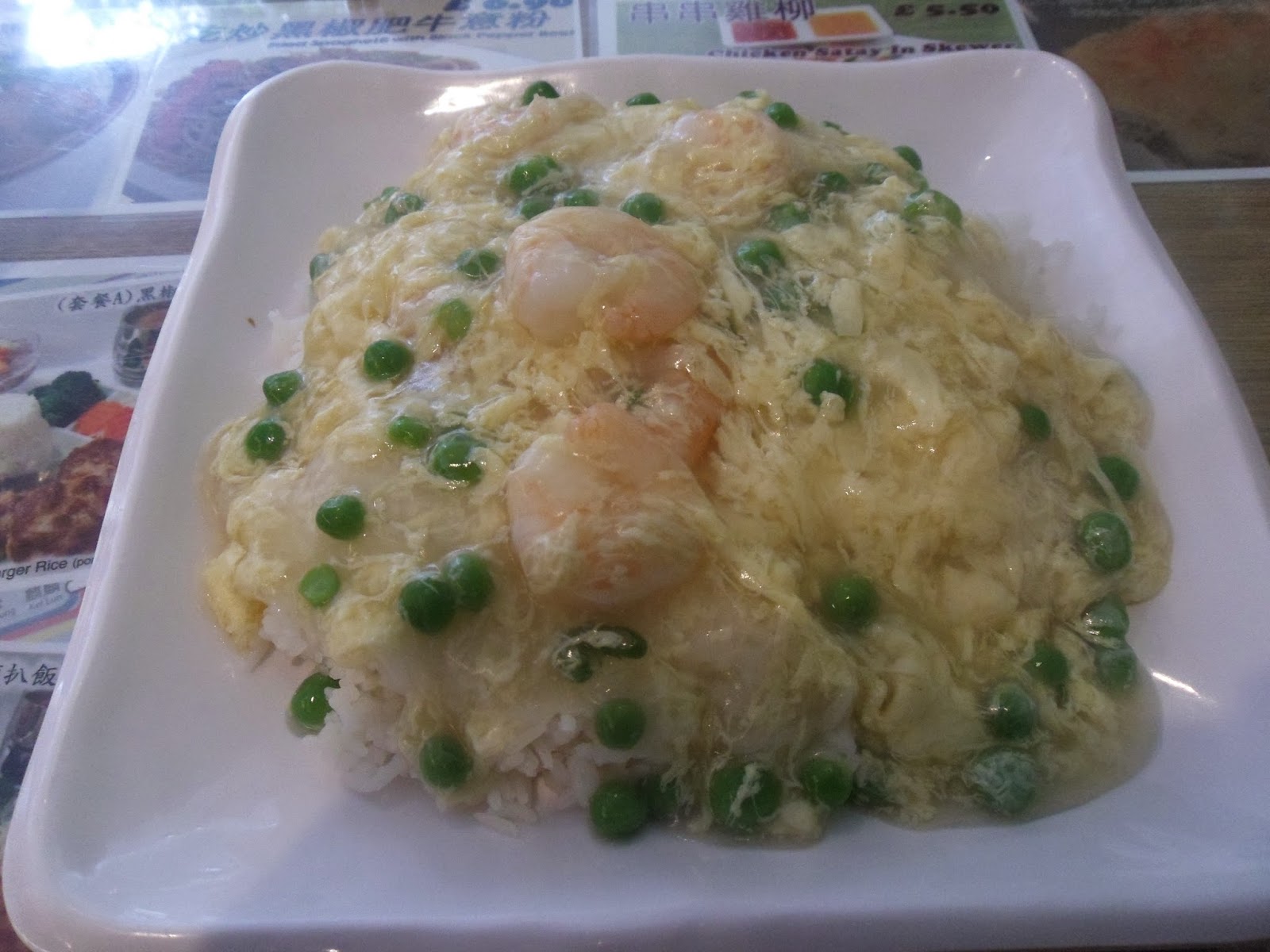 From the British Museum we made a quick detour for Anna to show me the building she works in (Birkbeck College - University of London). Then we made our way to Chinatown! We spent some time resting and while enjoying lunch at LongJi. It offers a menu of HK-style food, has two floors, and has a lot of lightly-colored decor that makes it feel peaceful, playful, and modern. We didn't get too adventurous with our selections (sweet and sour chicken for Anna, egg and shrimp over rice for me), but we were very much pleased with the food. 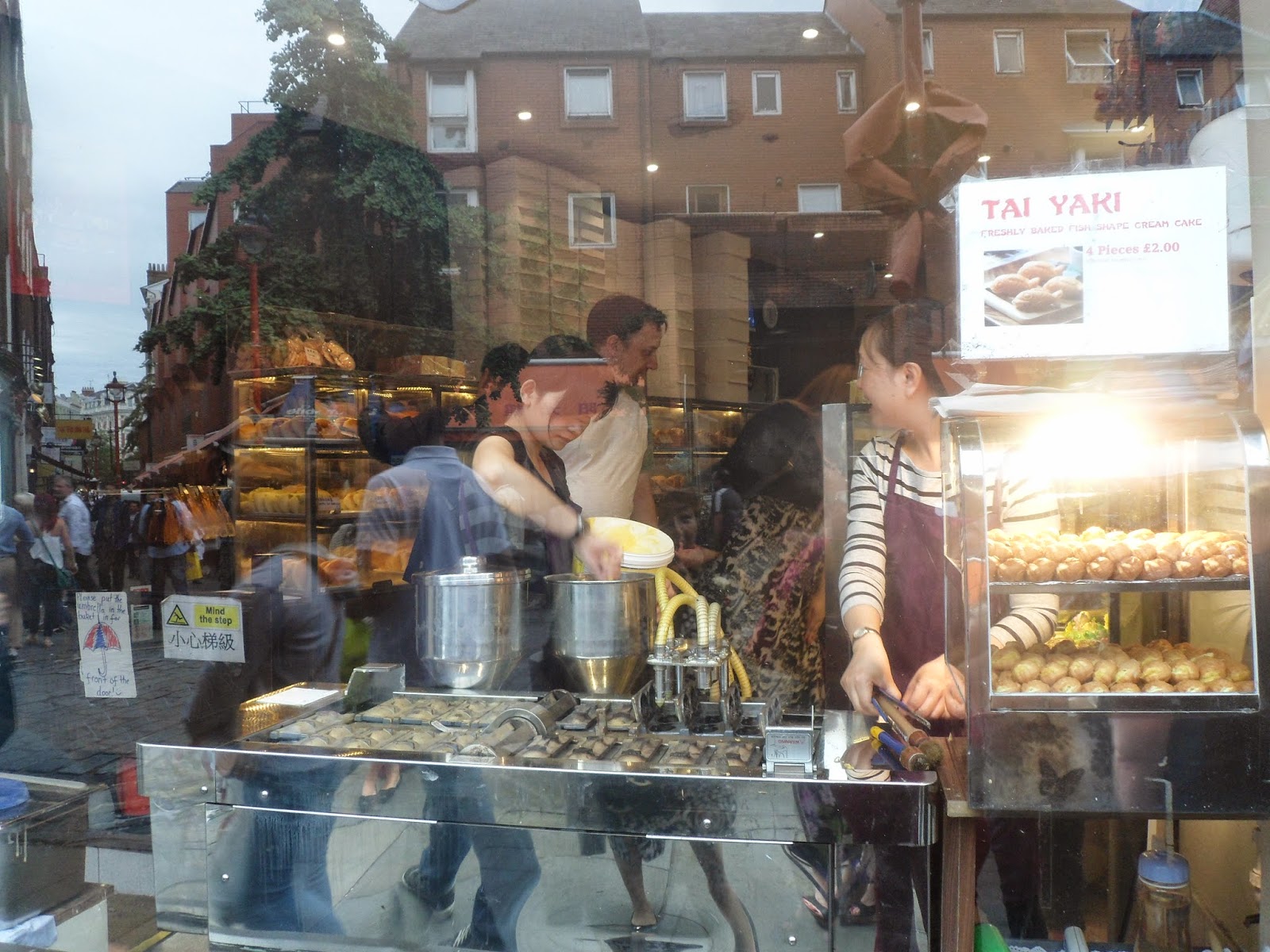 From there we walked through Chinatown just to see what was there. I was especially delighted when we happened upon a Chinese bakery/Tayaki shop. They make the tayaki right in the front window for all to see! Such delicious smells were coming from that place and we even popped in to take a quick look around. But we were both too full from lunch to want to buy anything, so we left without getting any sweets. I know. I'm kicking myself right now just thinking about it. 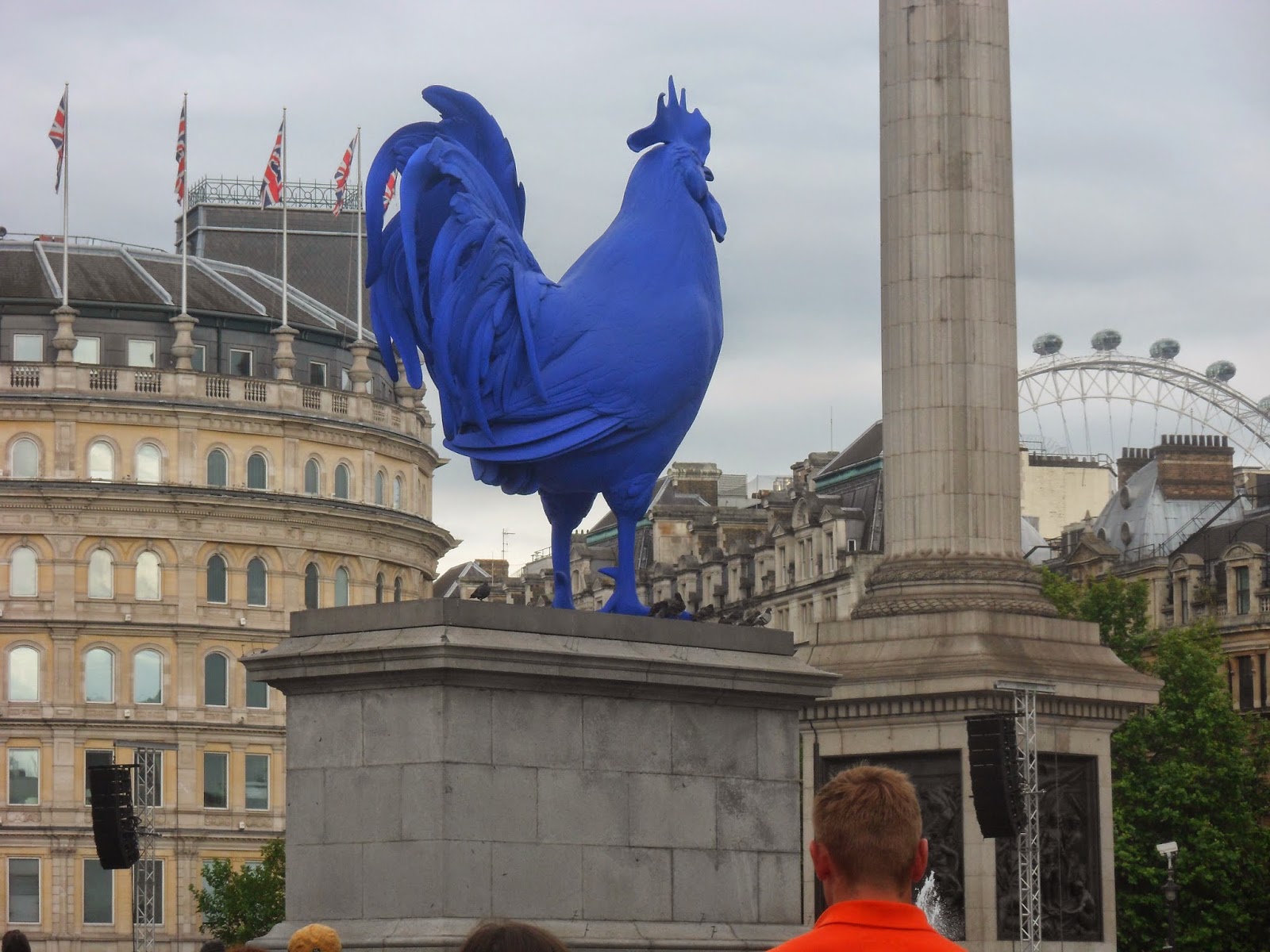 After walking through the rest of Chinatown we passed through Piccadilly Circus before reaching Trafalgar Square. When we arrived we caught the last couple minutes of a concert that was going on in honor of Tour de France starting up. Other than the concert and all the people hanging out or passing through, I was also pleased to see this blue chicken. Anna explained to me why it was there but I forgot.

From Trafalgar Square we'd originally planned to go see Big Ben, but we made a little detour instead... 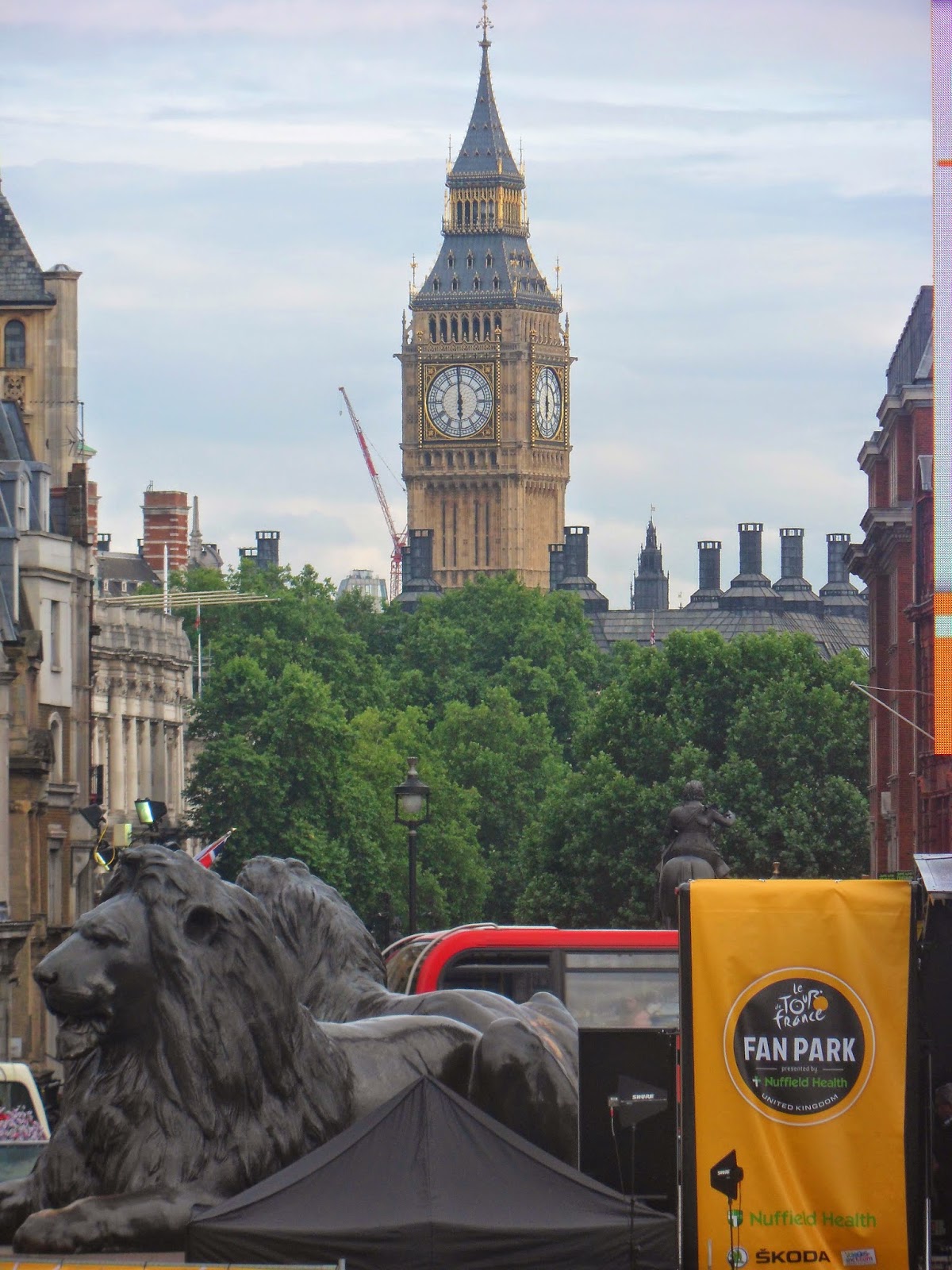 Find out where we went by checking out part 2!