Yesterday I had class in the morning and afternoon (that's six hours of French total, back to back), so I didn't have as much time to go exploring as I usually do. But I still wanted to go somewhere new and unwind a bit, so I headed to Le Marais. Le Marais is near the city center and is one of the oldest parts of Paris. One of the teachers at my school recommended it to me, saying that there are quite a number of interesting shops, historic buildings, pictoresque parks and gardens, museums, and cultural neighborhoods (including those of certain Jewish, gay, and Chinese communities). I wasn't there for too long and didn't buy anything, but I'll give you a few tips just based on my observations. 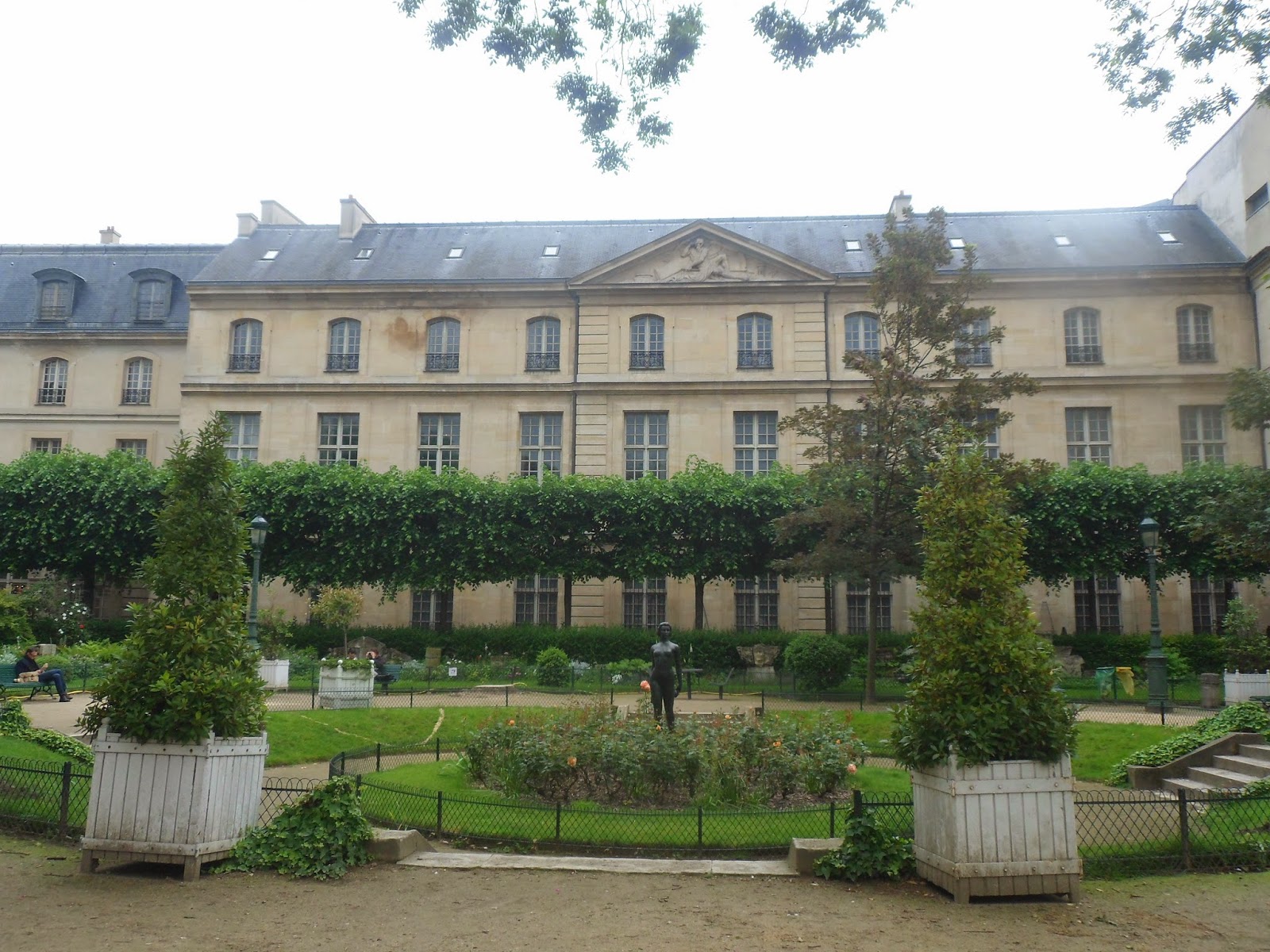 I went down one street (Rue Pavée) and happened upon Le Square Georges-Cain, which is just across the street from the Swedish Institute. The square is open and you can stand anywhere in the garden and see the rest of it, so it's not very big. Still, there are a number of things to see. At its center is a bed of flowers which surround a statue of a nude woman. A path goes around the garden and its benches are arranged to face the statue. On the ground and along the walls of the buildings that border the garden you'll also find old sculptures that originally came from other parts of the city. Why they were placed in this garden specifically, I have no idea. But they certainly make this garden less than ordinary. 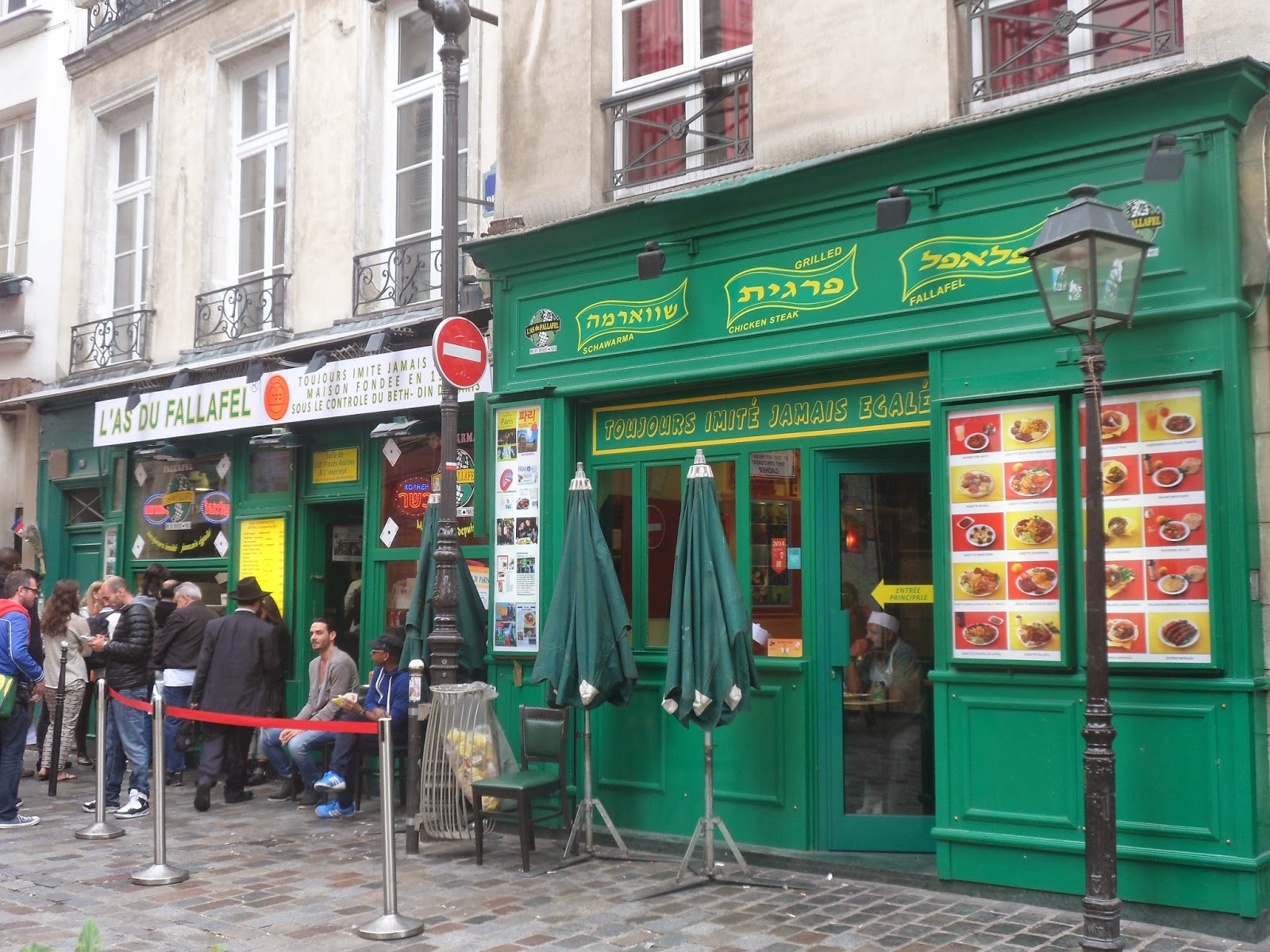 After walking around Georges-Cain I went back up Rue Pavée and turned right onto Rue des Rosiers. This street, from Rue Pavée to Rue Vieille du Temple, happens to be one of the busiest streets of the Jewish quarter in Le Marais. The type of establishments I saw the most were restaurants, bakeries and cafes. But they don't offer the sort of goodies that you can just find anywhere in Paris. If you're looking for good-quality Jewish pastries, pita, felafel, or anything else of the sort, Rue des Rosiers is the place to go. A bakery called Murciano looked especially scrumptious from the outside, plus its decor is blue which I really liked. And there was a line outside a place called l'As du Fallefel, which is apparently a big deal. I also noticed quite a few Jewish bookstores, so I would also recommend this street if you're interested in Judaism, issues that concern Jewish communities, or texts written in Hebrew. 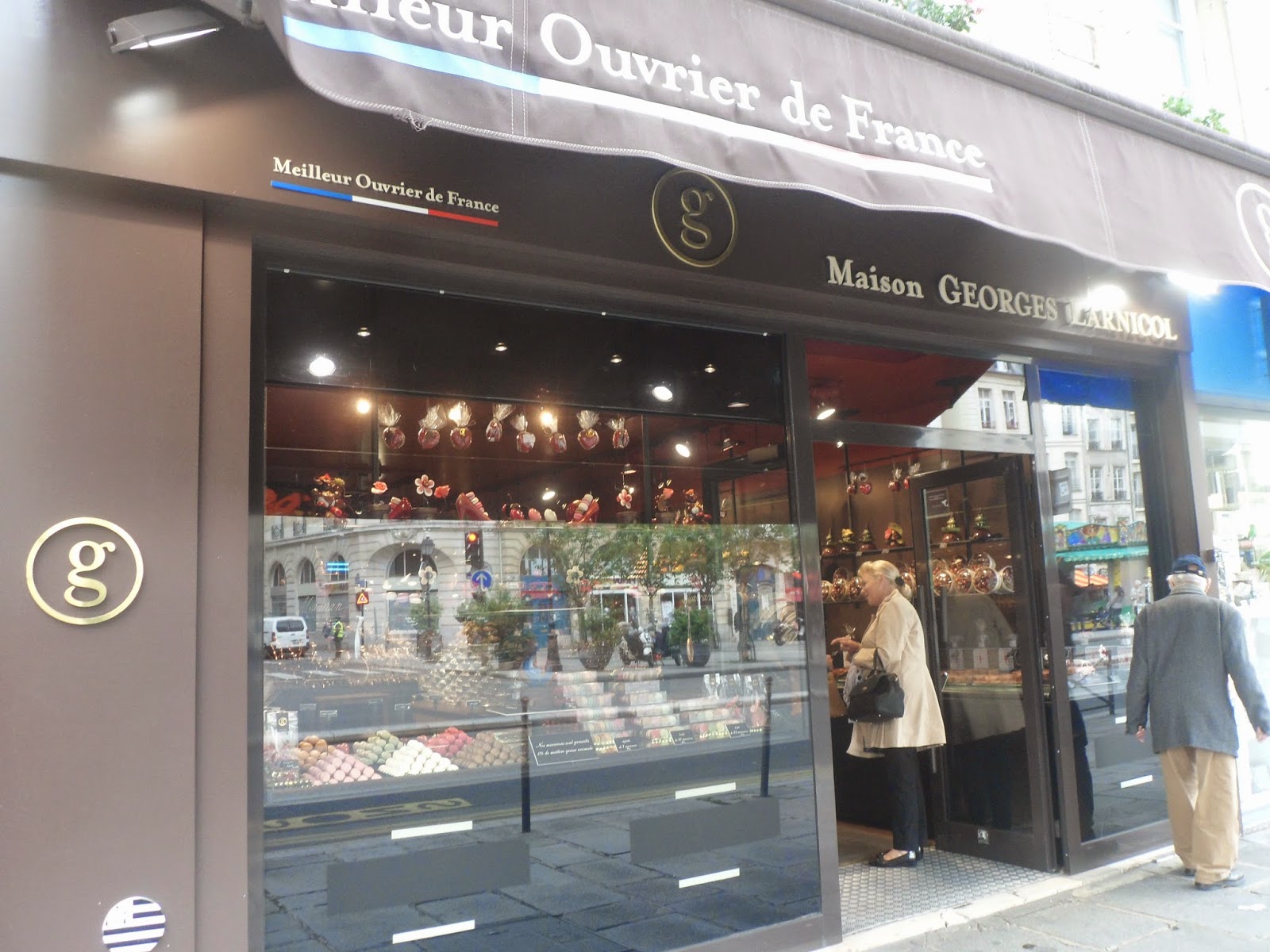 After Rue de Rosiers wandered down a few more streets before I had to head back "home". One of the last interesting places I looked around in is a must for chocolate lovers. Maison Georges Larnicol is on Rue de Rivoli, and has almost any kind of confection you can think of. Chocolates, macaroons, chocolate covered raisins, chocolate covered nuts, some pastries, you name it. This would be a great place to go if you have a sweet tooth and have a penchant for chocolate.

When I have time, I would definitely like to go back to Le Marais so that I can see more. (I keep saying that I'll go back to places, although I'm not sure that I will. I'm kind of one-and-done when it comes to sightseeing. Plus my daily schedule will be different starting Monday. We'll see. But I digress.) Anyway, Le Marais is a must-visit that I highly recommend!