The following are dramas that I watched while in Paris this summer, just to keep the Japanese language juices flowing in my brain. 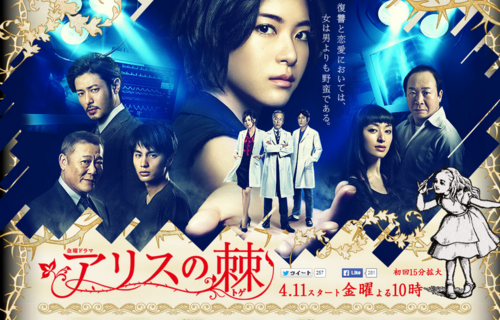 'Alice no Toge' is a medical drama/whodunnit/revenge thriller that uses Alice in Wonderland as a motif to characterize the female protagonist and her enemies. Said protagonist is a woman named Mizuno Asumi (Ueno Juri), whose doctor father died at the hands of his peers during a surgery. His peers then manipulated records and the media to sully his reputation in order to cover up any wrongdoing. Determined to get revenge against the people responsible, Asumi changes her name, becomes a doctor, and joins the staff of her father's former hospital in order to pick her targets off one-by-one. She is aided in her mission by a former childhood friend Nishimon Yusuke (Odagiri Joe) who now works as a journalist.

The main plot and the scorned-secretive-woman/goodhearted-naive-man-in-power pairing is very similar to that of 2010's Fuji TV revenge and mystery drama, ギルティ 悪魔と契約した女 ('Guilty: The Woman who Made a Deal with the Devil'). With some important differences: The main character in that drama was framed for her family's death, and she actually kills a target or two or has them kill themselves (whereas Asumi only ends her targets' medical careers). The similarity between the two shows almost made me stop watching once I picked up on it, but I stayed with it because Ueno Juri's acting was just so compelling. While the female protagonist in the other drama made my blood turn cold, Asumi in 'Alice no Toge' impressed me with her controlled two-sided behavior and I was able to sympathize more with her suffering. Plus, this show more carefully explores the meaning, possibility, and limits of forgiveness. If you like a good revenge drama that's not too dark, give this one a shot. The theme song's kinda catchy too. 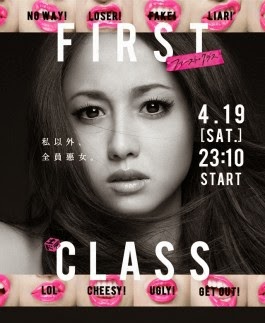 This is an underdog story set in the fashion industry. Yoshinari Chinami lives in the country and works at a craft store, all the while dreaming of being a fashion designer. Through a lucky connection she gets hired as an intern at Japan's top fashion magazine, FIRST CLASS. Little does she know, she's stepped into a lion's den. The nearly all-female staff of editors, models, and photographers is mired in jealousy, competition, backstabbing, lies, and, secrets. It's all about fashion and power. Nothing reminds us of this more than the "ranking" system that's in place. Each episode starts with the previous episode's ranking of characters, and then ends with an adjustment to this ranking based on the events that just transpired. Chinami tries her hardest to maintain her idealistic dreams and goodhearted nature, but eventually she learns to play the game and starts to resemble her rivals/bullies more and more as she climbs the ladder to success.

I'm not gonna lie, this drama is corny. And the slightly-off American English narrations just add to the cheese factor. I only started watching it for Itaya Yuka anyway. But I don't know... once I started I just couldn't stop watching! I got wrapped up in all the draaamaaa, and the episodes are so short that I always wanted to know what happened next. (At 35 minutes, this show's episodes are about 10 minutes shorter than those of your average Japanese drama.) Plus the ending theme song is pretty catchy and current. After some weeks the 10th and final episode still has yet to be subbed, so I can't judge the show as a finished piece of work yet. But if you like catty drama, and you're looking for something that's mildly entertaining that won't require too much brain power, 'FIRST CLASS' is it. 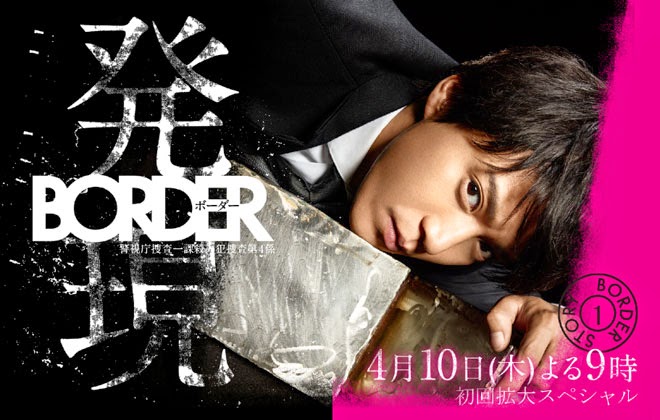 This is another drama that I watched because of one actor, and that would be Oguri Shun. Not only is he nice-looking, but he's a brilliant actor, so I was looking forward to seeing what this drama had to offer. In it he plays a dedicated, idealistic, and ambitious detective named Ishikawa Ango who dies and then is revived after getting shot in the head. As a result of this incident he can see and speak to dead people, including the victims of the homicide cases that he investigates. He uses the information they give him to solve his cases in order to serve justice and allow these victims to pass on to the afterlife in peace.


However, his "gift" gradually takes a mental toll on him, and he becomes so obsessed with solving these cases and getting justice for the victims that he dips deeper and deeper into illegal activity in order to get the information and results that he wants. Originally I thought the "border" of the drama's title referred to the border between this life and the next, with Ishikawa as intermediary. But in the last couple episodes it becomes clear that the title can also refer to the border between good cop and dirty cop, between good/justice and evil. The show blurs these lines and casts doubt on whether these concepts are really so separate and opposed to each other. The progression of the individual episodes can be a little dry and swift at times, but it's not until the final seconds of the last episode that you really get what the point of this drama is. It's like a movie in that way. I definitely wouldn't call 'BORDER' Oguri Shun's best work, but it asks some pretty interesting moral questions that make for some good food for thought.

I wasn't wowed by any of these dramas, but if I had to pick my favorite for this round it would be 'Alice no Toge'. Ueno Juri's skillful way of interchangeably portraying bitterness and fragility made me a fan of hers.
Posted by Deela (Danielle G.) at 7:02 PM