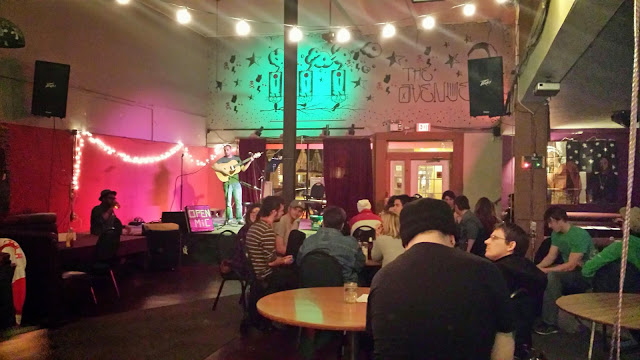 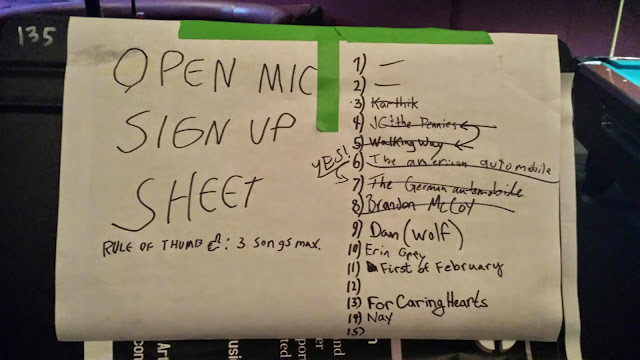 After the Parade of Honors, I picked up Hilena and we made our way to open mic night at The Avenue, a bar that calls itself a cafe. We had our friend Marlee come along as camerawoman. So originally, it was only supposed to be the three of us, and we hadn't thought of inviting anybody to come support.

But then I mentioned it in passing to one friend, who apparently told another, who then told another. And all of them decided amongst themselves that they were coming! So even though we technically didn't invite anyone to come, we ended up with a crew of six altogether. Isn't it awesome when friends show up even when you haven't asked or expected them to? 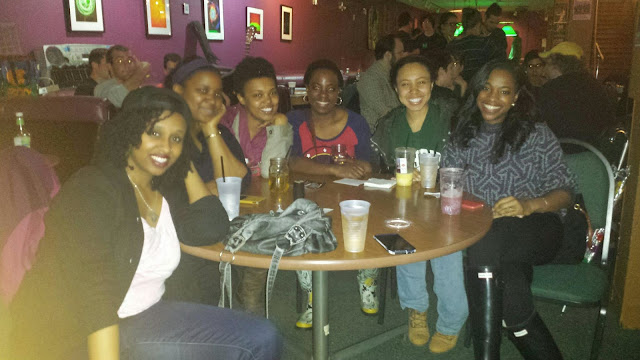 The event started at 9. The first three of us got there around 10, and we signed up for the next available slot, #11, to give the rest of the crew time to get there. They arrived at about 11. Once everyone was there, we passed the time talking, joking, listening to and commenting on all the acts, and drinking just a lil bit. We also made a new friend in a local poet named Erin Gray. She was friendly but tipsy, and was a little too obvious when flirting with my friend Esse (far left in the group photo). The woman plopped herself next to Esse and actually wrote a poem about Esse's beauty on her phone unbeknownst to us, and then went up and performed it when it was her turn. While Esse cringed with embarrassment, the rest of us died laughing! 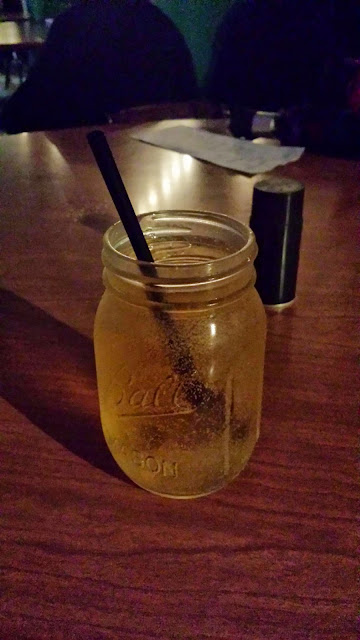 The only downside was that we didn't know we'd be there so long. Folks who were in with the host kept getting moved ahead of us on the list, and so we actually ended up being second-to-last of the night and didn't get on stage until 12:30am. But Hilena and I were glad just to have a chance to perform at a real live music venue for the first time, so we waited patiently. We performed two songs, the videos for which are below. I'll admit, it's a little hard to hear us (plug in your earphones!). A mixture of an inattentive crowd and us not projecting enough, I think. But we sounded great in person! I'm incredibly proud of us for trying something new and performing at a legit open mic for the first time. And our friends seemed to really enjoy it, so we were glad to have repaid them for their patience through song.

At one point Marlee turned to me and said, "Thanks for inviting me. I feel like a young person! You know, out here, doing what young people do." (She's younger than both Hilena and I, mind you.) But I understand what she means, as I normally don't have that much of a life either, haha. I'm glad that all of us were able to come together and have a good time. Thanks to Marlee for recording, and to Christen,  Jo, and Salem for coming to show support! We appreciate you with all of our hearts!

Second song is an original by us (written by me, arranged by the both of us), entitled "Please Keep Me Company". Enjoy x2!
Posted by Deela (Danielle G.) at 9:38 PM

Email ThisBlogThis!Share to TwitterShare to FacebookShare to Pinterest
Labels: First of February/FoF, Outings