As I did with the last movie I watched, I'm starting with what I don't like about this one so that I can emphasize some of its better qualities rather than its shortcomings.

Chris Rock plays Andre Allen, a washed-up comedian and recovering alcoholic. He wants to take his career in a new direction but no one takes him seriously. On the opening day of his newest film, a beautiful, sharp, yet enigmatic journalist/critic named Chelsea (Rosario Dawson) follows him around for a day. Their interaction forces both of them to reflect on themselves and their pasts with "rigorous honesty". 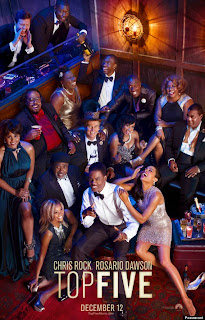 What I don't like about this film: It's not that funny. At least not funny in the way I thought it would be. It's marketed as being a side-splitter and gutt-buster, and with Chris Rock and the army of comedians he's got with him, you have no reason to expect otherwise. Sure Top Five offers some chuckles, but it isn't hilarious. And that was disappointing. But I think it was only disappointing because I walked in thinking it was going to be a certain kind of film, when it was never that to begin with. Top Five is about comedy, the industry, and the art of being a comedian. But it's not really a comedic film, or a "comedy". What I mean is that it's not a film meant strictly for laughs. It's also meant to make you think. And that can be a let down if you come into it only expecting to sit down and laugh.


What I really like about this film: This film is so smart! It might not be the funniest thing ever, but yet and still the writing is clever and Chris Rock made a lot of smart decisions in it. All that black and comedic excellence in one film? Gold. That scene where the old man from the hood busting Andre's (Chris Rock's) balls about gettin' all "Hollywood" and forgetting the little people turns out to be his father? Gold. That group of black comedians sitting around clowning Andre and talking about their top five rappers? Gold.  Chris Rock, Whoopi Goldberg, Adam Sandler, and Jerry Seinfeld sitting around a table in a strip club talking about marriage? Four of the greatest flippin' comics of all time in one scene together? Gold. DMX growling and singing Nat King Cole's "Smile" in a jail cell? Gold. I was dying. so. hard! Who else can accomplish all that in one film? No one but Chris Rock. Few people have the genius, body of work, connections, and respect amongst his fellows in the industry like he does, and Top Five is proof.

Plus, the film's message is powerful once you catch onto it. Andre is struggling with the reality that people love the character he's played more than the man himself. They like him better when he's broken (drunk and lost). He has more to offer, but is almost ready to give up on himself because he's afraid he might not be funny anymore sober. And of course, in true Hollywood movie fashion, Andre and Chelsea (Rosario Dawson) fall for each other. But he tells her he loves her in an unconventional way ("Hey, what's your Top Five?"). And the film leaves the story open-ended. Does he go back to get the girl? Does he go through with the sham wedding to his reality star fiancee? Does he stay in character and continue to play the Hollywood game? Does he go back to doing standup comedy? Who knows.


Lastly, Top Five reminds us that even after three years, "Ni**as in Paris" by Jay-Z and Kanye West still bangs. Since the film was co-produced by the two rapper moguls, I'm sure that this isn't a coincidence.

Would I recommend it?: Yeah, sure. I wouldn't pay to see it again, but it's worth seeing at least once.
Posted by Deela (Danielle G.) at 10:27 PM